Banking Innovation in the UK

Challenger banks are rapidly growing in number and scale, living up to their title of ‘challenging’ current incumbents.

By placing the needs of customers and colleagues at the heart of their operations they have been able to deliver a laser-focus on value in every interaction, building trust and growing lasting relationships. Their promise of frictionless experiences and new innovations delivered at speed have proven alluring for many customers.

Contents:
A competitive marketplace
Who are the UK banking challengers?
A week in the life of a typical challenger bank customer
Our key observations
Transparency and openness in action
The value of physical presence recognised by those scaling up
Voice recognition technology developed specifically for banking
The way forward

Whilst established banks have legacy technologies and processes which can date back years, or decades, they also have significant assets to deploy new innovations through, including their branch network and customer service teams. This makes them uniquely placed to implement some of the innovations we see differentiating the banks of the future.

In the last decade, over 75 ‘challenger’ banks have emerged in the UK market alone. This increase has been partly driven by increasing de-regulation, which has reduced the barriers for new entrants obtaining a banking licence. While the process is still, rightly, challenging, launching a new bank is now a tangible and attractive prospect for many. For example, Starling Bank were able to go from a standing start to a full bank in about three years.

Customers are also responding favourably to these new banks. A recent letter to shareholders from Starling Bank highlights their rapid growth, with over five times the predicted volume of new account holders in just nine months, and a processing rate of over £200m transactions each month. While initially focused on serving a niche audience, players such as Starling Bank and Monzo have now road tested their proposition and set their sights on capturing a wider market share across consumer and business sectors.

While well-funded challengers have experienced high growth, profitability has often remained elusive. However with the use of agile operations and the absence of legacy infrastructure, there are significant opportunities to reduce costs and present a tangible threat to incumbents. Monzo Bank have been working to reduce their operating costs, cutting the cost to service active accounts by an impressive 80 percent in 10 months, from £65 in September 2017 to £15 in June 2018. The bank is now making revenue of +£2 on each account (CBR online).

Who are the UK banking challengers? 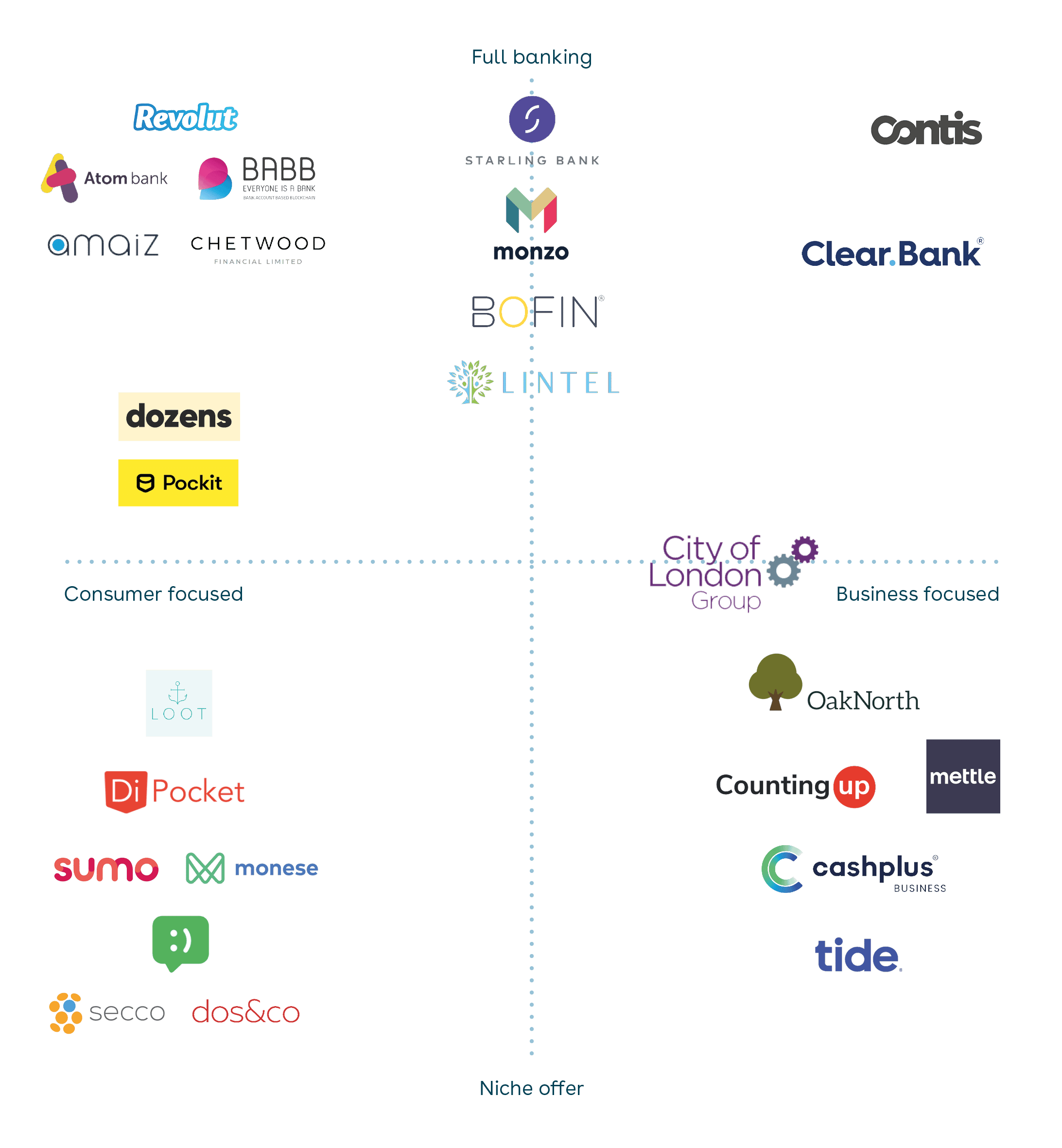 While new challengers, due to their volume have clustered around key market segments with the likes of Monzo and Starling now providing broad offerings to consumers and business, there still appears to be an opportunity for those with a clear focus on business banking, particularly servicing larger enterprises.

A week in the life of a typical challenger bank customer 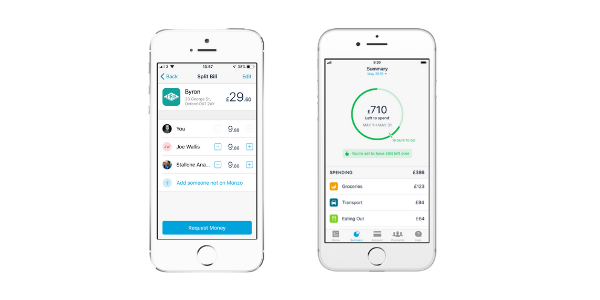 Monday - Checking remaining balance
The total disposable income is clearly displayed, taking into account the next pay day and payments due in the interim

Tuesday - Obtaining a PIN reminder
After forgetting the PIN number for this card, it is quickly displayed in the app, following a brief security check

Wednesday - Going shopping
Card transactions are immediately deducted from the available balance and are auto-categorised based on the merchant, showing the total spent on luxuries this month

Thursday - Losing a card
Having lost the payment card, it is immediately frozen through the app to prevent unauthorised payments. Once it’s found at the bottom of a bag, it is unfrozen and ready for use again

Friday - Splitting the bill with friends
Once the transaction has been made the bill can be split in the app with payment links sent to all friends, whether or not they use the same bank

Saturday - Paying in cash
A minor annoyance as there are no branches to visit; this needs to be paid in via the local post office or Paypoint convenience store, sometimes with a long queue

Sunday - Flying to a different country
On arrival to a new currency zone, the bank immediately provides the current exchange rate while allowing card payments with no additional fees

1. Transparency and openness are key for new entrants

Innovators are predisposed to be transparent with customers, particularly on highly sensitive topics such as data breaches and security, using unusual openness as an initial opportunity to differentiate.

2. Speed of opening an account is no longer a differentiator

3. The value of physical presence is being realised by those achieving scale

Challengers moving from start-up to scale-up are beginning to see the value of physical touchpoints to engage with customers. Starling Bank is a recent example, as they entered into partnership with the Post Office to achieve a physical network alongside Monzo utilising the Paypoint convenience store network - both with risk that comes from outsourcing key parts of the customer journey. One drawback of outsourcing services of this nature is that it can become more challenging to directly influence and control the customer experience.

4. Voice has the potential to become the next major differentiator

Voice-controlled banking has the potential to improve accessibility to services outside of major metropolitan areas and underserved customer segments, such as the visually impaired. Banks and technology firms are racing to provide access to services that deliver improved convenience and security with successful trials and early products launched to customers. As of yet no-one appears to have successfully embedded this technology and captured its potential.

Transparency and openness in action

In the context of tightening regulation such as GDPR, innovators have used transparency and openness as a major point of differentiation.

Three examples of challenger bank responses to major events show an unusual openness and transparency that has strengthened relationships with customers and built trust.

Digital-only bank Monzo used Typeform to collect customer survey data. Upon notification of a potential breach, they published an article outlining exactly what had happened, who was affected and their next steps – including ending their supplier contract and removing any customer data from their servers. 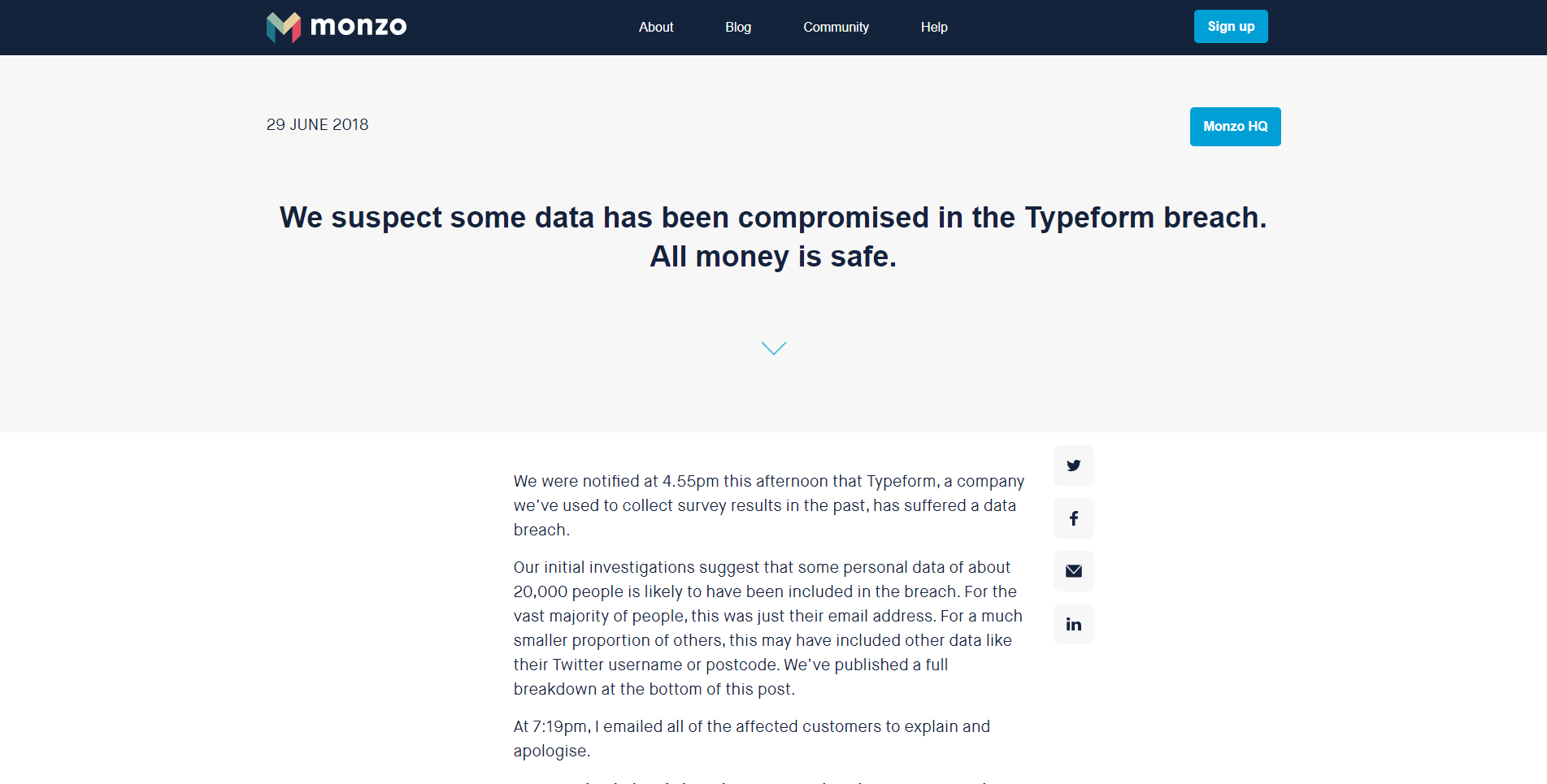 Another example also comes from Monzo, this time during the Ticketmaster data breach. This outlined their entire fraud detection process of identifying suspicious transactions, taking precautionary steps (such as automatically re-issuing cards) and attempting to resolve directly with Ticketmaster, who claimed there was no evidence of a breach until two months later. 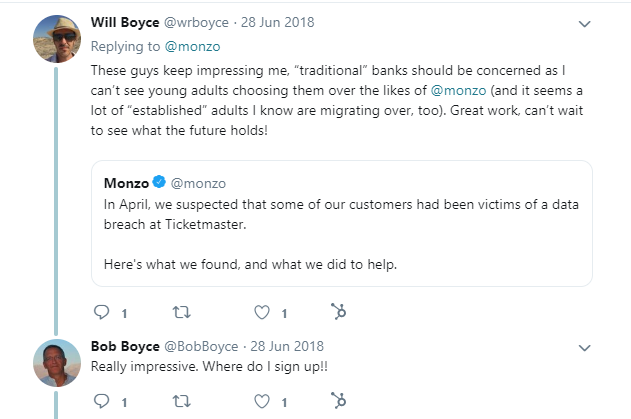 BA revealed that the personal and financial data of customers who made a booking between 21 August 2018 and 5 September 2018 had been accessed, affecting about 380,000 cards. Starling Bank announced 24 hours later, via their social media accounts, that affected customers had already been identified and replacement cards dispatched. 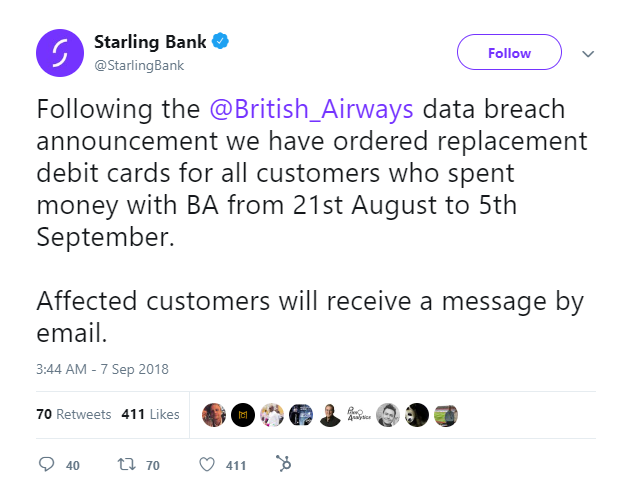 The value of physical presence recognised by those scaling up

Whilst many innovations initially thrive through digital-only channels with tech-savvy early adopters, challengers are increasingly realising that in order to achieve scale, physical presence is still a key factor.

In November 2018, Starling Bank become the first mobile bank to offer physical branches, after partnering with the Post Office to offer banking services to their customers.

The partnership allows their current and business account customers to deposit and withdraw cash through the Post Office’s 11,500 branches nationwide, giving them an immediate footprint without needing to build and manage an expensive branch network.

Outsourcing first-line elements of the customer experience to a third party brings great opportunities, but also great risk. In November 2018, Monzo also announced usage of a physical network, via PayPoint locations, typically located in convenience stores across the UK, enabling cash deposits. Customer feedback has been mixed, with vocal critics citing lack of awareness and understanding by store operators, with some customers even being turned away.

When the digital element of the customer experience is smooth and seamless, customers will expect the same experience in branch. They will not necessarily understand, or care, whether a third party is responsible.

Incumbents are also redefining how their physical spaces are utilised. In the US, Capital One have launched the Capital One Café, an effort to market to millennials that appears aimed at bridging this disconnect with the physical. This is a move to support their loyal customers and attract new customers with a more human-focused and relationship-based approach to banking. 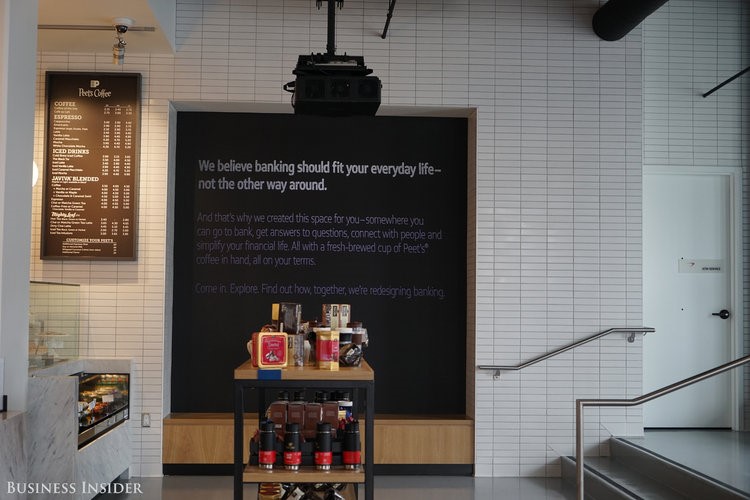 The company is opening a string of cafés in some of the nation’s largest cities that function as co-working spaces open to the public. Anyone, regardless of bank affiliation, can grab a cup of coffee, sit on a couch and, if they want, get coached through their money problems by professionals for free.

In markets where many transactional elements can be better served through digital channels, redefining the role of the branch as part of a blended proposition will help develop meaningful relationships, deliver better experience and add greater value to customers, building genuine loyalty.

Commissioned by Australian bank ANZ, Apple have been working closely with app designers Nuance to create the first ever voice-recognition security log-in within smartphone banking apps.

This reflects a growing comfort from users in using their voice to conduct basic commands on their devices. It is also secure, as a person’s voice has five to ten times as many security points as other methods such as fingerprints; it is reportedly so advanced it can tell the difference between the voices of identical twins.

Voiceprint and biometrics company Nuance has developed the technology. They already carry a strong reputation, having designed dictation software Dragon Naturally Speaking. Although commissioned by ANZ it is likely that Nuance will begin working with other banks around the world to roll out the voice recognition technology.

In October 2017, U.S. Bank became one of the first to allow customers the ability to use Amazon Echo to access their account to check balances, obtain the transaction histories, and make credit card payments.

More recently, it’s been reported that Kansas City-based nbkc bank is building a conversational banking app with Finastra on the vendor’s growing FusionFabric.cloud open platform. The digital-savvy community bank, which uses Finastra’s core banking platform, wants to be at the forefront of new and evolving communication channels. This still leaves the opportunity for larger players to seize this innovation and, in delivering to a broader consumer base, leapfrog existing challengers.

The big winners will be those that create the world’s first truly seamless, omnichannel banking experience. Wherever the customer journey takes them, banking services should be available at:

The tips of their fingers

Access through mobile devices and online, with frictionless access to every day services and customer support, ensuring key services are available at the time of need.

The tips of their toes

Access to face-to-face services is still a major factor when building and maintaining customer loyalty. In a world where day-to-day services can be managed through digital channels, there is significant opportunity to re-define the role of the branch network and add additional value that digital-only challengers will find difficult to replicate.

The tip of their tongue

Managing balances, payments and other key activities though voice control will enable those who are forever mobile or in their cars to access convenient services in a safe, secure manner.

By taking advantage of their existing physical network and using the latest digital innovations, incumbents can secure their future in an increasingly crowded marketplace. It will require a radical re-assessment of customer segments, positioning, operating models, delivery mechanisms and technology.

Practicing transparency, providing voice solutions and re-defining the value branches can provide to customers are three key challenges. And the benefits for those who succeed are clear, with increased customer value, retention and profitability all on offer.

Stay informed. Be the first to hear our latest thinking.

Would you like to get in touch with us?